The thunderous noise of V8 engines will be returning to Silverstone Classic next year, following a 2-year hiatus, and will be showcased on Saturday’s Regent Street Motor Show (4 November).

To mark the re-introduction of the eye-catching Trans-Atlantic Touring Cars at Silverstone Classic, a rare 4.7-litre 1965 Mercury Comet Cyclone racer will be displayed on at Saturday’s Regent Street Motor Show.

The amazing light blue muscle car will share the central London spotlight with a couple of other outstanding luminaries selected from the unrivalled 1,000+ racing entries that will be competing on the full Grand Prix circuit next July at the Silverstone Classic. 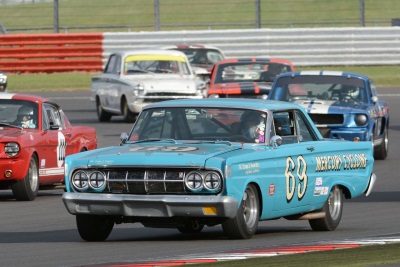 An incredible Peugeot 908 Le Mans sportscar will also be on display at the Show this weekend to highlight the arrival of two new races for Masters Endurance Legends. Bringing the motor sport story almost up to date, these will star awe-inspiring grids of super-fast endurance prototypes and GTs from 1995-2011.

The Cyclone and Peugeot will be joined by an equally iconic JPS-liveried Lotus 76 F1 car from the mid-seventies. It represents the FIA Masters Historic Formula One Championship, another of the Classic’s numerous on-track highlights, featuring the sights and sounds of 3-litre F1 cars.

The central London display will also include the much-loved Silverstone Classic VW campervan and an exquisite Jaguar XK140 drop head from the fifties. This roadster will be doing its best to represent the whopping 10,000 privately-owned classics that are showcased at the massive event on car club stands.