Stirling Moss putting on a demonstration at the 2008 Goodwood Revival. photo by Michael Cole

The legendary Sir Stirling Moss, who passed away at Easter 2020, will be commemorated at Goodwood’s headline motorsport events in 2021. It was at the Goodwood Motor Circuit that Moss took part in, and won, his very first motor race, on 18 September, 1948, a day after his 19th birthday. In the years that followed, Moss contested 56 races at Goodwood, winning 21 of them and finishing on the podium a further 13 times. Goodwood was the scene of four of Moss’ seven Tourist Trophy victories; two for Ferrari and two for Aston Martin, including clinching the British marque’s world championship title in 1959. Tragically, it was also the scene of his career-ending accident on 23 April, 1962. One of the founding patrons of the Festival of Speed, and a regular competitor at the Revival, it’s little wonder that Moss became a favourite of the fans, who christened him ‘Mr Goodwood’. Given his racing record – winning in almost everything he drove – it is fitting that Moss should be remembered at the 2021 Festival of Speed presented by Mastercard, the theme for which is ‘The Maestros – Motorsport’s Great All-Rounders’. 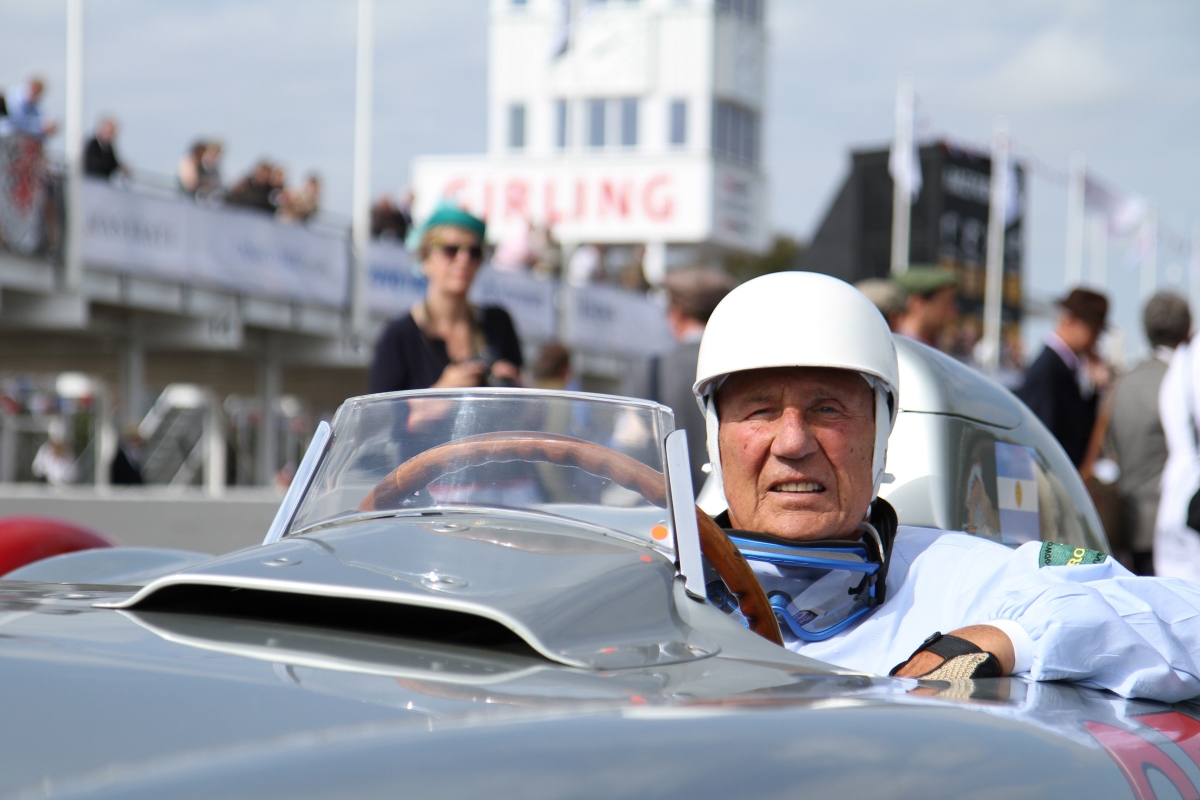 Stirling Moss at Goodwood for the 2011 Revival. photo by Adam Beresford

This weekend marks the anniversary of the 1955 Mille Miglia, which Moss won with the invaluable help of co-driver Denis ‘Jenks’ Jenkinson. The daring duo completed the epic 1000-mile race in 10 hours, 7 minutes and 48 seconds, at an average speed of 99 mph – a record which will stand in perpetuity. Honouring this achievement at the Festival of Speed, Mercedes-Benz will be displaying the fearsome 300SLR ‘722’ in which the pair competed, and which is rarely seen outside the Mercedes-Benz Museum in Stuttgart. Mercedes-Benz will also be bringing a W196 Formula 1 car of the type Moss used to win his first Grand Prix, at Aintree in 1955. The Goodwood Revival in September will host perhaps the largest ever gathering of Moss’ competition cars, celebrating his life and career in a way that sadly wasn’t possible in 2020. Returning for the parade will be ‘722’ in what will be one of its last public outings for many years. Assembling on the track with it will be the Lotus 18 in which Moss defeated the mighty ‘Sharknose’ Ferraris at both Monaco and the Nürburgring in 1961. Returning to Goodwood will also be the Rob Walker Racing Ferrari 250 GT SWB which Moss drove to his last Goodwood win, at the Tourist Trophy in 1961. Many of the Moss parade cars will also be racing in earnest again during the Revival, including the Aston Martin DB3S in which he finished second at Le Mans (in the Freddie March Memorial Trophy), and the Nürburgring 1000km-winning DBR1 (Sussex Trophy). Also invited to compete in those two races respectively will be his Reims-winning Jaguar C-type and Cooper T49, while a real rarity, the Ferguson P99 four-wheel-drive Grand Prix car which Moss piloted to victory in the International Gold Cup in 1961, will join the grid for the Richmond Trophy. The Revival will also be the setting for the second running of the Stirling Moss Memorial Trophy. Formerly the Kinrara Trophy, this race was renamed for Goodwood SpeedWeek presented by Mastercard in 2020 and will now become a permanent fixture on the Goodwood calendar. Contested by Jaguar E-types, Ferrari 250s, Aston Martin DB4 GTs and AC Cobras, this has been described as ‘the most beautiful race in the world’, taking place as the sun falls on the Friday night of the Revival weekend. Finally, the 78th Members’ Meeting in October will see the third running of the Moss Trophy for GT cars of a type which raced up to 1962 – a fitting way to keep the Moss name alive at Goodwood’s most exclusive race meeting. The Duke of Richmond said: “Stirling and his wife Susie were such an important part of the Goodwood family for so many years. All of us here felt his loss especially keenly as we weren’t able to commemorate his incredible life as we would have wanted last year. We hope that fans at our events around the world will join us in celebrating his racing career and bidding farewell to ‘Mr Goodwood’ in 2021. Stirling’s supreme skill and love for his sport will continue to be remembered at Goodwood for many years to come.”